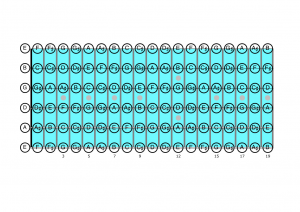 Don’t worry, it’s not actually as difficult as memorizing every single fret on each string. There are tricks you can use that make it easy!

But before we look at fretboard memorization, it’s important that you know the names of your strings.
They are: E A D G B E in ascending order. 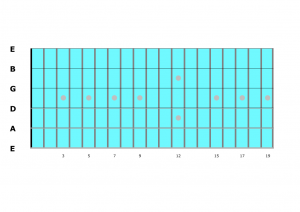 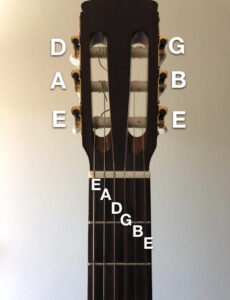 When looking at a labeled fretboard you will see the guitar string numbering as such: 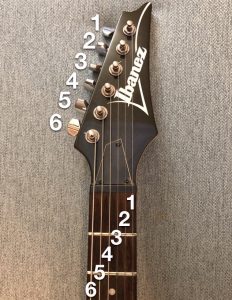 Every time you move up a fret you are moving up a note, which should be apparent from the diagram above.

If you’re wondering, what are frets on a guitar, they are simply the blocks on your guitar: 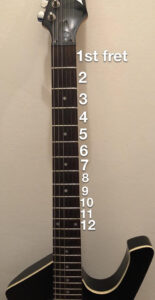 As you can see, the frets are numbered starting with 1 and ascending up towards the body of the guitar. Most guitars have anywhere from 19 to 24 frets. The open (when you don’t hold down any fret) is known as the Open, or zero fret.

In music there are 12 notes, and they are designated the letters A through G (A B C D E F G – collectively known as the natural notes ~ these are all the white keys on a piano).

If you’ve ever wondered, what is the musical alphabet?
This is your answer: A B C D E F G.

There are also what are called Sharps and Flats (and these are what are termed as accidentals ~ these are all the black keys on a piano).

The designation for Sharp is simply a number or hashtag sign: #.

Every note has a sharp except for B and E!

Again, notice that B and E do not have sharps.

Ok, if those are our 12 notes then where do Flats fit in?

Simply put, it’s the same 12 notes, just that the sharps are labeled as flats.

The designation for flat is: b.

So here then are the notes in order with flats:
A Bb B C Db D Eb E F Gb G Ab

So now the question arises, “When is a note sharp and when is it flat?”

Well, if we’re speaking of reading musical staff then it depends what key you’re in, but if you’re just learning to play guitar then what I advise you to think about is that a note is sharp if you are ascending: 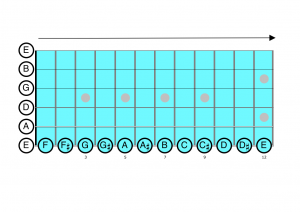 …and it is flat if you are descending: 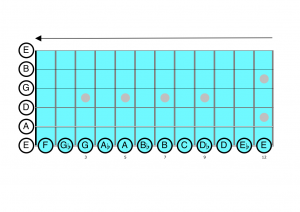 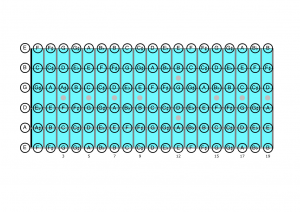 How to Learn the Notes on the Fretboard

Ok, now that we got some basics out of the way, let’s learn how to start learning guitar notes on the fretboard.

There are several approaches you can take:

The first thing I have my students do is start to name the frets on the low E string starting from the open and going all the way up to the 12th fret. Notice that the 12th fret is the same as the open ~ this is the same note at the next higher Octave.

This is just something we will take a moment to do at the end of our lesson. It really only takes about 10 seconds to do.

As they get used to doing this I start to test them, asking “Where is A? Where is B?” etc.), having them fret the note and say which fret number it is.

Once they get their notes down on the E string, we move on to the A string and proceed in the same fashion. We move through all six strings in this manner as they get each one down. How long that takes is really up to you. If you take time to do it once a day, or each time you practice, you’ll get them down in no time!

As you get down all six strings you can then start to get to know the notes above the 12th fret; which are just the same notes at the next higher octave.

And for you bass players, you can also take the same approach if you are working on learning bass fretboard notes!!!

*Side Note: all 12 notes are also collectively known as the chromatic scale*

How to memorize guitar fretboard

Another approach is to name the 1st fret of each string.

Try ascending up all 6 strings this way! 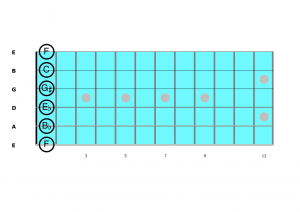 Now, on guitar, inversion is an important concept. If you do something one way, try its mirror opposite. For this exercise this simply means descending back through all 6 strings naming the 1st fret again; starting with the high E string this time.

Once you get the first fret down, move on to the 2nd fret, then the 3rd and so on…

If the previous approach is to learn the guitar fretboard notes taking a horizontal approach; then this is a vertical approach…

Get started with this approach! In the next blog we’ll look at some reference points that make memorization even easier! And trust me, the further you grow with your guitar skills… the more important knowing your notes on the guitar fretboard becomes!

Thanks for reading, I hope this helps! If you need a guiding hand on your path of learning guitar and someone with a guru’s eye on you to make sure you’re well rounded in your training and learning proper basics, coordination, and growing into music in a real living way, feel free to get in touch with me for one-on-one virtual guitar lessons!